The Grief of Excitement

So I just moved to a new town.  And it was really exciting.

And I just started a new job at a great church.  And it's really exciting.

And I just got ordained.  And it was really exciting.

And I'm getting to do new and wonderful things with God and God's people.   And it's really exciting.

So why am I sitting here at the local Starbucks feeling so drained?  Why do I feel so much heartache and loss even when things in my life are looking up and looking new and are, ostensibly, exciting? 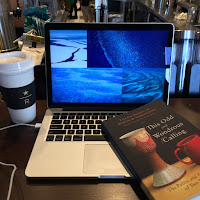 I mean, I thought I had gotten all the grief out of the way earlier this summer.  Isn't that what my Netflix binges were for?

This grief that comes as the flip side of all the new and exciting was something that I was completely unprepared for.  The expenditure of all that energy psyching myself up for something different that I wasn't really ready for the reality of the crash.

And it's taken me a while to figure out that the crash is ok.  That it's normal.  That if I wasn't experiencing something I probably should be a little concerned.  Excitement can only take you so far, because reality comes and it's intense.

Mostly because this crash, this temporary exhaustion is just that.  Temporary.

Because I'm not in this alone.  I'm surrounded by God and a great cloud of witnesses.  So, even though it's been two and half weeks and everything has suddenly hit me, I have not been abandoned.  I am not forgotten.

I have been led by the Spirit to this point, and I trust that she will keep leading me forward.

But now, I think it's time for me to be strong enough to admit that I need a rest stop.  I need a moment to catch my breath.  To take in my surroundings and to really prepare myself for the next little leg of the journey.

And so it might happen at Starbucks this morning.  Or maybe it'll happen tomorrow after I get that sermon for Sunday written.  But sometime soon, I'm going to take that breath.  I'm going to breathe deeply and richly and take a day to truly rest, to let God restore and renew me in the way that only God can.

And then I can be excited again.  At least until the next time I take a breather.  Amen.
Posted by Unknown at 11:33 AM 1 comment:

This sermon was preached to the people of
Word of Hope Lutheran Church
on
August 16th, 2015.

Just so we get this out on the table, “Jesus is weird.”  I think we’ve all been thinking it over the past few weeks, that Jesus would talk on and on about something as simple as bread, and bread from heaven, and then we get to this week’s text where Jesus doesn’t just talk about bread, but he then talks about eating his flesh and drinking his blood?  I’m sure those who were listening to him thought the exact same thing, “Jesus is weird.”
And this isn’t even the weirdest thing Jesus has ever said and done.  I mean, it’s up there, but Jesus has at least a few more things that make us scratch our heads that he’s done.  He’s washed the feet of his disciples, he’s encouraged little children to be a part of the “adult class,” he’s eaten with sinners and prostitutes, he’s talked to Samaritans, he’s talked to Samaritan women, he’s called a woman a dog, he’s healed a Roman soldier’s servant, the list goes on and on.  Oh, and he’s was crucified, died, and was raised from the dead.  Yep, Jesus is weird.
Now, weird isn’t a bad thing.  You can ask my brother, who “I think” knows it’s a compliment when I say that he’s weird.  And I’ve seen bumper stickers that say “Keep ‘Local Town Here’ Weird.”  Weird isn’t bad, it’s just...well, it’s just weird.  It’s something you have to think about.  It’s something you have to wrestle with, it’s the twist of the ordinary that you don’t expect, which makes us think.  And it’s that last piece, that “it makes us think” piece, is why some people don’t like things that are weird.  They want things to be black and white, with no shades of gray. They want things to be cut and dry, with easy answers that they don’t have to spend all night wrestling with or chewing on.
Except Jesus has never really given us easy answers or black and white solutions.  When Jesus is asked questions, he answers with more questions or he answers with paradoxes or parables.  Jesus doesn’t offer up one-time fixes, instead Jesus wants people to think and believe on their own.  Jesus wants people to wrestle with him, wants people to engage, to stay up all night gnawing on the answers the way my dog might gnaw on a bone.
And so, knowing this, are we really surprised that Jesus’ answer to “please sir, can we have some more?” turns into a lecture that culminates with Jesus talking about eating and drinking flesh and blood?  Jesus wants us to chew on this reply for a bit.  Jesus wants us to wrestle with it - to gnaw on it.
Of course, many will tell you that this text has an easy answer, that Jesus is talking about Holy Communion, this meal where we gather together and eat bread and drink wine that has become the body and blood of Christ.  But I’m not sure that’s really an easy answer either.  I mean, the Eucharist is kind of weird too.  It really is, I know this, because whenever I have to try and explain it to someone who hasn’t grown up in the church it usually goes something like… “So you eat the body and blood of your God?”
“Yes, but it’s also bread and wine.”
“How is this not cannibalism?” “Well, because it’s bread and wine, not actually human flesh and blood.”
“Uh-huh, so how does it become the body and blood of God?”
“Well, you see...there’s a prayer, and then God shows up, and it just happens.”
“...right…”
I mean, even the church, who’s had 2000 years to figure it out has divided about 4 times on this issue and you get answers from all over the place, like that after the Eucharistic prayer it’s no longer bread and wine it is the body and blood to it’s just a symbol or memorial meal.  It’s not actually body and blood.  And then you have the Lutherans who say, well…it’s still bread and wine, but it’s also Christ’s body and blood, and it just sort of happens.  We’ll call it holy mystery and it’ll be good.
Holy mystery, by the way, is just theology speak for paradox.  Or to put it another way, “yes, we know it’s weird, but we believe it anyway.”  We believe that God shows up in this weirdness and God is made known through this weirdness.
And God always has been made known through this weirdness.  God isn’t just some spiritual deity up in heaven.  God isn’t some puppet master pulling strings.  God isn’t a clockmaker that wound up the world and let it go.  Instead, God has become intimately involved with all creation.  In Genesis, God molds the earth, walks among it.  Then God becomes flesh, becomes a baby.  God combines spiritual and physical.  God descends and fills us with the Holy Spirit.  God is three and one.  God desires humanity to be partners in creation.  God desires humanity to be partners in conversation.  God is willing to go to great lengths to bring us back to God.  And God has done them too!  God is just full of weird things that humans would not have just made up on their own - they’re too weird for us.  They make us think and believe things that don’t make rational or logical sense, and in spite of that - or because of it, God is revealed in them.


And so, we’re back to this weird text.  This text that doesn’t provide easy answers.  This text that makes us scratch our heads and wonder what on earth Jesus is talking about.  This text that people have been gnawing on for thousands of years.  And perhaps we just need to throw our hands up and say, “Jesus is weird.  God is weird.  And that’s good.  We need weird.”  Amen.
Posted by Unknown at 1:00 PM No comments: